Mendoza, Argentina.- A team of researchers from different countries coordinated by the Dinosaur Laboratory and Museum of the Faculty of Exact and Natural Sciences of the National University of Cuyo (UNCUYO), in the Argentine province of Mendoza, found the hidden lineage of This prehistoric animal. The recognition of a new lineage of dinosaurs called Colossosauria, which would be the largest titanosaurs in the world, is the most recent discovery of a team of researchers from different countries, led from the UNCUYO Dinosaur Laboratory and Museum. The colossosaurs included the heaviest land animals ever known, with maximum body masses that reached 50 to 70 tons. Like the Argentine forms Patagotitan, Argentinosaurus, Puertasaurus, and Notocolossus, the latter with a humerus of 1.76 m in length, the largest humerus known for this group. 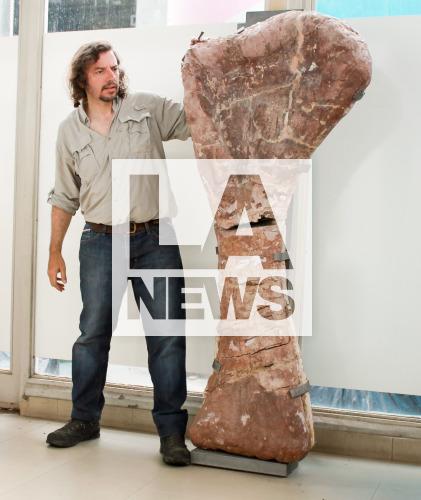 Mendoza.- In the photo disseminated by the National University of Cuyo released on September 4, 2019, the humerus of a Notocolossus is observed, along with paleontologist Bernardo González Riga, in the Laboratory and Museum of Dinosaurs of Mendoza. A group of researchers from various countries, led by the National University of Cuyo, recognized "a new lineage" of giant dinosaurs in Argentina, which they called Colossosaurs, which include the world's largest titanosaurs with the heaviest body mass that It has been known, between 50 and 70 tons. That house of studies reported. 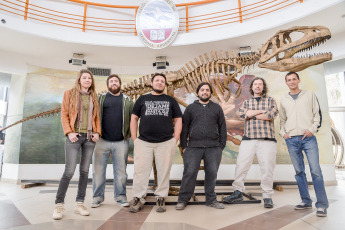 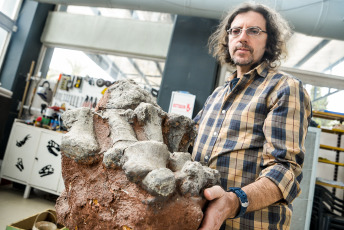