“We are exceptionally pleased with drill results from the new Midfield Southeast zone, including one metre of 582 g/t gold within an intersection of 5.5 metres grading 126 g/t gold, in a near-surface region of the Bayan Khundii deposit,” said Peter Akerley, Erdene’s President and CEO. “A second intersection, 40 metres north of 15 metres of 26 g/t gold, including one metre grading 338 g/t gold, confirms the existence of a new high-grade zone in an area that is currently classified as waste or low-grade material that could add meaningfully to resources during the early stages of the Project.”

“While we are rapidly advancing the Bayan Khundii development, with results of the Project’s Bankable Feasibility Study anticipated in the coming weeks, over the past six months we have demonstrated the potential of the Khundii Gold District, with high-grade intersections at Bayan Khundii and Altan Nar, and the discovery of the Dark Horse prospect,” continued Mr. Akerley. “Further results are forthcoming from recent work at Striker and Dark Horse, where multiple instances of visible gold were encountered. We are developing follow-up drilling campaigns for these exciting targets, prioritizing near mine expansion opportunities at Bayan Khundii that are expected to add to our established resource base.”

*Reported intervals are downhole widths.  Drill holes were oriented to intersect the SW dipping WNW trending gold veins normal to their orientation and therefore reported width are very close to true widths.  However, the veins in this area may be related to a N-S trending structure which could affect vein orientation locally.  Additional study will be required to confirm this concept.

The Midfield SE drilling program was designed to test for mineralization in zones currently classified as waste or low-grade stockpile material, identified as having the potential to add significant value at the earliest stages of mining. Previous drilling (BKD-262) identified a high-grade intersection within 10 metres of surface that returned 3 metres* of 52.9 g/t gold but was relatively isolated. The results of the current drill program cover an area of approximately 50 metres by 50 metres south and east of BKD-262. The 18 holes in the current program total 645 metres with all holes drilled (azimuth 030 and dip -45) to intersect the dominant vein orientation perpendicular, except two holes (BKD-273 and 276) drilled at -60 degree dip.

Drilling intersected anomalous gold mineralization in 16 of 18 holes, with eight holes containing metre wide intervals ranging from 10 g/t to 582 g/t gold, all within 25 metres of surface. The two holes without gold mineralization are located at the northern and eastern extent of the drill program. They remained in Jurassic cover sediments (BKD-271 and 280) and did not penetrate to the unit hosting the gold mineralization. Three other holes (BKD-273, 276 and 283) also tested the eastern periphery of the target area and remained largely in unmineralized Jurassic units with anomalous gold in host rock at the bottom of these holes.

From the northern extent of the mineralized zone (intersection in BKD-262), the target area is now expanded to a total strike length of 200 metres and is untested beyond this point. The program has tested the northern 50 metres, and the southern 50 metres was partially tested by previous trenching and drilling, leaving approximately 100 metres in the centre untested. Reported intersections on the southern 50 metres include 1 metre* of 55.6 g/t gold within 3 metres* of 18 g/t gold in trench BKT-06 and 35 metres* of 5.7 g/t gold including 1 metre* of 194 g/t gold in drill hole BKD-10. One additional hole drilled along the target structure (BKD-45) intersected fault breccia with anomalous gold near the surface but was not designed to test the newly identified mineralization zone.

The high gold grades reported today are hosted in quartz adularia veins, quartz stockwork, fault-related breccia and in the iron oxide cement of these breccias. This new target area is located at the intersection of two structures, the dominant NW trending SW dipping gold mineralized stacked quartz adularia vein set and a north trending, NNE verging fault, characterized by dominant hematite and quartz stockwork breccias. This intersection connects through the centre of the new high-grade zone, and can be traced to the south through a number of high-grade intervals and potentially through the very high-grade core of the Midfield orebody to the north.

The current interpretation is that the N-S structure is part of a series of en-echelon faults as a sub-set of a NW trending extensional fault zone corridor that introduced the gold-bearing fluids into the first order N-E trending transfer structures that bound the SW dipping structural setting hosting the stacked veins of the Bayan Khundii deposit. This interpretation would support higher grades at the intersection of the N-S and NW trending structures. The identification of this conceptual feeder zone and importance of the intersecting structures can be used to test for extensions and higher grades in multiple locations surrounding the existing reserves for which programs are now being designed. The possibility of parallel en-echelon features is demonstrated by another outlier of high-grade gold, 1 metre of 157 g/t gold, 200 metres east and outside of the proposed pit, which now needs to be tested with this new concept.

As per our standard assaying procedures, screen metallic analyses have been completed confirming all values greater than 5 g/t gold.

*Previous results in this release are stating apparent thicknesses

An 11 hole, 280 meter drill program has been completed near-surface, southwest of the main Striker ore zone. This area previously produced visible gold in trenching, although not reflected in the limited drilling completed. However, on the eastern side of the target area, higher grade samples were previously returned from trenching and drilling. The objective of this program is to extend these high-grade zones to the west in the upper 40 metres from surface. Visible gold has been observed in four new drill holes.

At Dark Horse, 3.5 km north of the Bayan Khundii gold deposit, a program consisting of detailed mapping, higher density soil and rock ship sampling and a series of three trenches totaling 180 metres were completed in June of this year. Visible gold has been observed in two of the three trenches.

Samples from this exploration work have been transferred to SGS Laboratory in Ulaanbaatar with results anticipated in late July. Follow up programs will be designed to expand on any success.

Erdene’s deposits are located in the Edren Terrane, within the Central Asian Orogenic Belt, host to some of the world’s largest gold and copper-gold deposits. The Company has been the leader in exploration in southwest Mongolia over the past decade and is responsible for the discovery of the Khundii Gold District comprised of multiple high-grade gold and gold/base metal prospects, two of which are being considered for development: the 100%-owned Bayan Khundii and Altan Nar projects. Together, these deposits comprise the Khundii Gold Project. The Bayan Khundii Gold Resource1 includes 521,000 ounces of 3.16 g/t gold Measured and Indicated (“M&I”)² and 103,000 ounces of Inferred resources at 3.68 g/t gold. Within the M&I resource, a proven and probable open-pit reserve totals 422,000 ounces at 3.7 g/t (see the full press release here), providing significant potential growth of reserves with the development of the remaining M&I and Inferred resources1.

In October of 2019, Erdene announced the results of an independent Technical Report for the Khundii Gold Project (press release here), which included a Pre-feasibility Study (“PFS”) for the Bayan Khundii deposit and an updated Preliminary Economic Assessment (“PEA”) for the Altan Nar deposit. The PFS and the updated PEA results include an after-tax Net Present Value at a 5% discount rate and a US$1,300/oz gold price of US$97 million and US$24 million, Internal Rate of Return (“IRR”) of 42% and 90% for Bayan Khundii and Altan Nar deposits, respectively. The PFS envisions an open-pit mine at Bayan Khundii from Years 0-7, producing an average of 61,000 oz gold per year at a head grade of 3.73 g/t gold, and an open-pit operation at Altan Nar during Years 7-10, for an average annual production of 48,000 oz gold at an average head grade of 3.46 g/t gold, utilizing a conventional carbon in pulp processing plant at the Bayan Khundii mine. Erdene has secured a mining license for the Bayan Khundii deposit in August of 2019 and plans to start producing gold at Bayan Khundii in late 2021. The Altan Nar PEA is by nature, a preliminary economic study, based in part on Inferred Resources. Inferred Resources are considered too speculative geologically to have the economic considerations applied to them that would enable them to be categorized as mineral reserves, which is required for a pre-feasibility or feasibility study. Mineral resources that are not mineral reserves do not have demonstrated economic viability, and there is no certainty that the PEA will be realized.

Erdene Resource Development Corp. is a Canada-based resource company focused on the acquisition, exploration, and development of precious and base metals in underexplored and highly prospective Mongolia. The Company has interests in three mining licenses and three exploration licenses in Southwest Mongolia, where exploration success has led to the discovery and definition of the Khundii Gold District. Erdene Resource Development Corp. is listed on the Toronto and the Mongolian stock exchanges. Further information is available at www.erdene.com. Important information may be disseminated exclusively via the website; investors should consult the site to access this information.

Peter Dalton, P.Geo. (Nova Scotia), Senior Geologist for Erdene, is the Qualified Person as that term is defined in National Instrument 43-101 and has reviewed and approved the technical information contained in this news release. All samples have been assayed at SGS Laboratory in Ulaanbaatar, Mongolia. In addition to internal checks by SGS Laboratory, the Company incorporates a QA/QC sample protocol utilizing prepared standards and blanks. All samples undergo standard fire assay analysis for gold and ICP-OES (Inductively Coupled Plasma Optical Emission Spectroscopy) analysis for 33 additional elements. For samples that initially return a grade greater than 5 g/t gold, additional screen-metallic gold analysis is carried out which provides a weighted average gold grade from fire assay analysis of the entire +75 micron fraction and three 30-gram samples of the -75 micron fraction from a 500 gram sample.

Erdene’s drill core sampling protocol consisted of collection of samples over 1 or 2 metre intervals (depending on the lithology and style of mineralization) over the entire length of the drill hole, excluding minor post-mineral lithologies and un-mineralized granitoids. Sample intervals were based on meterage, not geological controls or mineralization. All drill core was cut in half with a diamond saw, with half of the core placed in sample bags and the remaining half securely retained in core boxes at Erdene’s Bayan Khundii exploration camp. All samples were organized into batches of 30 including a commercially prepared standard, blank and either a field duplicate, consisting of two quarter-core intervals, or a laboratory duplicate. Sample batches were periodically shipped directly to SGS in Ulaanbaatar via Erdene’s logistical contractor, Monrud Co. Ltd. 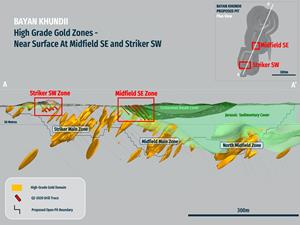 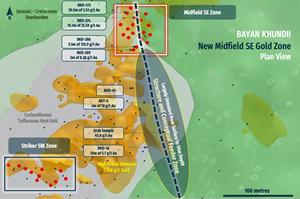 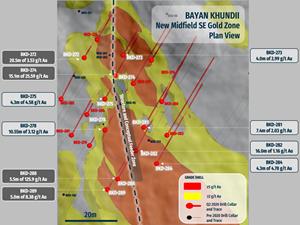 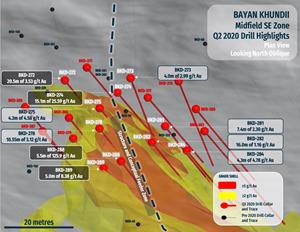 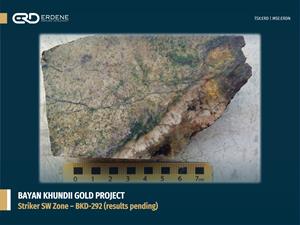