The partnership is groundbreaking. While many Premier League clubs have collaborated with sports betting partners, this is the first involving an online lottery business.

Wolves is quickly becoming known in cryptocurrency circles as the “go-to” club - like bitcoin itself, a “challenger” brand, challenging the Premiership hierarchy. Crypto Millions Lotto has chosen Wolves for this reason, as it introduces its brand to a global audience, particularly across Asia, Latin America, Canada, Russia and the CIS.

One of the most significant features of the partnership is the major step it represents in bringing the world’s most widely used alternative currency further into the mainstream. Wolves and Crypto Millions Lotto are doing their part to encourage bitcoin usage and adoption along with Crypto Millions Lotto’s unique referrer program, operated through sister site www.earnbitcoin.world. This allows registered users to receive referral fees in bitcoin and compete for a US$2.5 million prize without even buying a lottery ticket.

Commenting on the partnership, Crypto Millions Lotto CEO Sulim Malook stated, “We are delighted to have found a partner that has the same disruptive ethos as ourselves. Wolves’ success last year has put the club’s name on the world stage in a sport that is by far the most watched on the planet. As a company, we are big football fans, and Wolves is the most crypto-friendly club in England. They were an obvious choice.”

Steve Morton, head of commercial at Wolves, said, “We’re delighted to partner with Crypto Millions Lotto, an ambitious company that is keen to increase its exposure with the help of Wolves’ global reach across various platforms. We’re also excited to develop our relationship, which will also see the Wolves brand reach new audiences in Eastern Europe and South America.”

About Crypto Millions Lotto
Crypto Millions Lotto is the trading name for Ofertas365 Limited, a UK company whose shares have been listed on the Dutch Caribbean Securities Exchange since 2015. It is the world’s biggest bitcoin lottery and provides a unique opportunity for players to play with, and win, bitcoin. New customers receive three free lines as an introductory offer and jackpots, which are fully insured start at a whopping US$30 million and roll over until won, which on average is every 3½ weeks.

The lottery is fully licensed to operate in more than 150 countries. Customers can be assured that the draws are completely trustworthy, transparent and fair, as they are based on the outcome of the German National Lottery, which has been operational since 1955 and is televised twice weekly on German television.

About Wolverhampton Wanderers
Wolves was founded in 1877 and is one of the 12 Founding Members of the English Football League. The club has won the English First Division (as the Premier League was formerly known) three times, the FA Cup four times and the Football League Cup twice. It’s seventh place finish in 2018-19 means that it is competing in this year’s Europa League.

Today it is owned by Fosun, a Chinese technology focused consumer group whose shares are listed on the Hong Kong Stock Exchange.

A photo accompanying this announcement is available at
https://www.globenewswire.com/NewsRoom/AttachmentNg/ec7fe1f8-847e-4c51-9b4f-d3037532a519 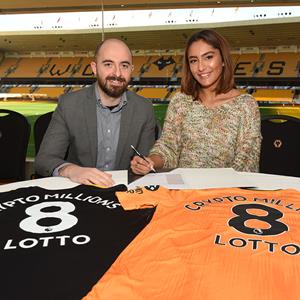